The Huetter Road Corridor project for Kootenai county is outdated and unneeded in its current form. It lacks a growth strategy for Northern Idaho that stays in line with a principal tenant of the citizens that live in Kootenai county; to preserve, to the greatest extent possible, the beauty of the area while enabling the growth of the community. Therefore, members of the community are demanding that the Kootenai Metropolitan Planning Organization (KMPO) immediately terminate the project and look to more forward-thinking solutions.

The final Right of Way Needs Report delivered in April of 2009, now 11 years old, did not provide the local citizens what they needed at that time and continues to fall short today. Currently, in Kootenai county, road projects like Highway 41, Highway 41 interchange, the Interstate 90 expansion, and others still do not address the traffic flow requirements for a developing area. As these plans move forward, it is of great concern to a quickly growing amount of local citizens that the Kootenai Metropolitan Planning Organization (KMPO) is going beyond its duties in this matter. The KMPO advocates for excessive removal of land from the local community with an unrevised budget strategy, incomplete plan, and blatant disregard of the impacted populous. The community has not been provided a clear plan on the Huetter Road Corridor project, even with news articles falling short of understanding the impact. A growing number of community members believe the KMPO to be out of touch with the needs of the area.

The KMPO's lack of understanding of the community’s feedback and willingness to address their concerns has been even more concerning. Members of the committee have brushed off valid concerns and alternatives. The behavior of the group has put them into a disfavorable light on the Huetter Road Corridor project. It has also questioned the motive driving the project since 2006 when it has been voted against recently.

Not a Forward Thinking Design

The updated project design attempts to incorporate details from the original but no longer uses the railway as part of the project’s right of way. There is no argument from local citizens that the railway is required to maintain its current location. However, the new design should seek to leverage the railway, including the ability to use more engineering designs to go above ground or underground in required areas. The proposed corridor and railway should consume the same space and open up the potential for a light rail system in the future.

Many additional points of concern will take much time to discuss and address, providing the KMPO will choose to listen to the community moving forward. Items that must be addressed include, but are not limited to, mass transit considerations for the future, the impact to the environment in the lower areas towards Interstate 90, why an additional highway is needed when there are already three (3) highways within roughly 3.5 miles of each other.

The last point creates a pardox and questions the Kootenai Metropolitan Planning Organization's ability to move forward with any further plans until a reassessment of the committee itself has been completed. It is not an argument from the local citizens that infrastructure growth is required, but it is an argument that what has been done to date, and currently ongoing, has been done well and will result in a positive impact on the community.

Costs Are Higher Than Planned

Information around the full Huetter Corridor alignment is difficult to find as KMPO has not organized it in a manner easy for citizens to see in full. It is an understanding that costs from the original assessment of this project, roughly $300 million, would have gone up over the past 11 years. However, another location states a bond is needed to secure 30% of the $1.8 billion in costs. The number was likely derived because the KMPO is attempting to pork-barrel every unfunded project together as a slush fund.

The updates also avoid reassessing costs due to the economic impacts of COVID-19, not only on local resources but also on the global supply line. However, to the best knowledge of the information found, the cost proposals are the same as what was found in 2009. That is quite unlikely.

The Design Does Not Reduce Congestion From the minutes of the KMPO and the general assessment of their plans, it is assumed that traffic volumes will decrease on Highway 95 and Highway 41 northbound. In all likelihood, if findings were used from high-density communities throughout the United States of America, this would not happen. Traffic going Eastbound on interstate 90, as shown in the updated traffic density flow map provided by the KMPO, would create further bottlenecks. Bypassing trucks from highway 95, already planned to go Eastbound, will continue to impact intersections at highway 41 and highway 95, creating more traffic flow concerns as volume increases over time.

After sifting through the poorly organized material on the Huetter Road Corridor project, it is unclear how many alternatives have been considered or what are the actual outcomes from the planning committee’s meetings. From all the information provided and the current expenses accrued for the Highway 41 project, it is unclear why the Huetter Corridor project should not be changed to the “Highway 95, 41, and 53 Connection” project? An alternative analysis must be completed for natural resource preservation, costs of land acquisition from local citizens, and noise levels for all other communities since there are much better options for traffic flow to be reduced in critical areas of Interstate 90. Why would funding diverted from a full build-out of the Huetter Corridor not be more valuable to spend on sweeping improvements of highway 95 and the highway 41 interchange?

How does this planning address traffic congestion passing over the Interstate 90 bridge into Washington? How does the Huetter Road Corridor plan support transportation routes heading Southbound on Highway 95 below the Spokane river and Eastbound on Interstate 90? What was the outcome of research done on increasing lane size on Highway 53? Was Highway 41 correctly sized to support overall growth if the Huetter Corridor was the Kootenai Metropolitan Planning Organization’s only means to elevate the current traffic flow impacts?

In all the designs presented, traffic lights and exits have been added aggressively. The number of exits and traffic lights will create additional bottlenecks, slowdowns, and places for accidents. The results can already be seen on Highway 95 as congestion builds. Increasing lanes will not increase the throughput if there are more stop-and-go locations. While connecting Highway 95 to Highway 41 and 53, Highway 95 must be refactored to reduce traffic lights using overpasses and underpasses.

The Huetter Road Corridor project is not the only one that needs to be refactored or canceled to improve the long-term scalability for future community development. While reviewing the myriad of alternatives that provide exponentially better solutions, several options appear to reduce costs while improving overall infrastructure. Reducing the need to claim land, reduce costs, reduce noise to the communities affected, reduce traffic hotspots, and improve environmental impacts is critical to the design concepts. Principal tenants for designs need to be adopted in the solutions proposed by the KMPO moving forward. 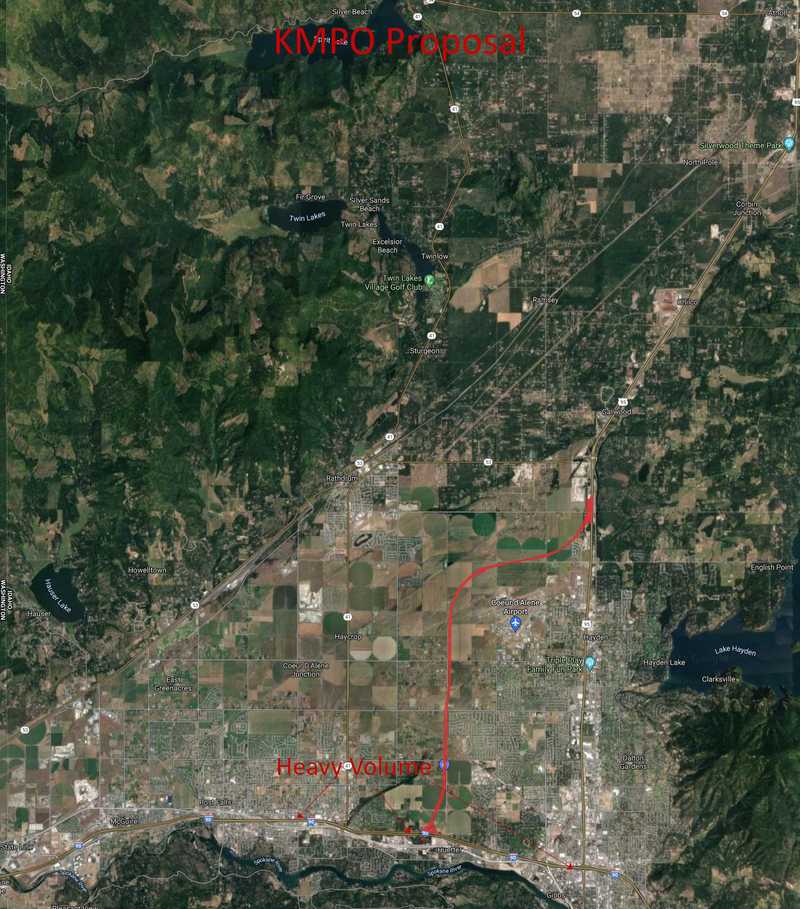 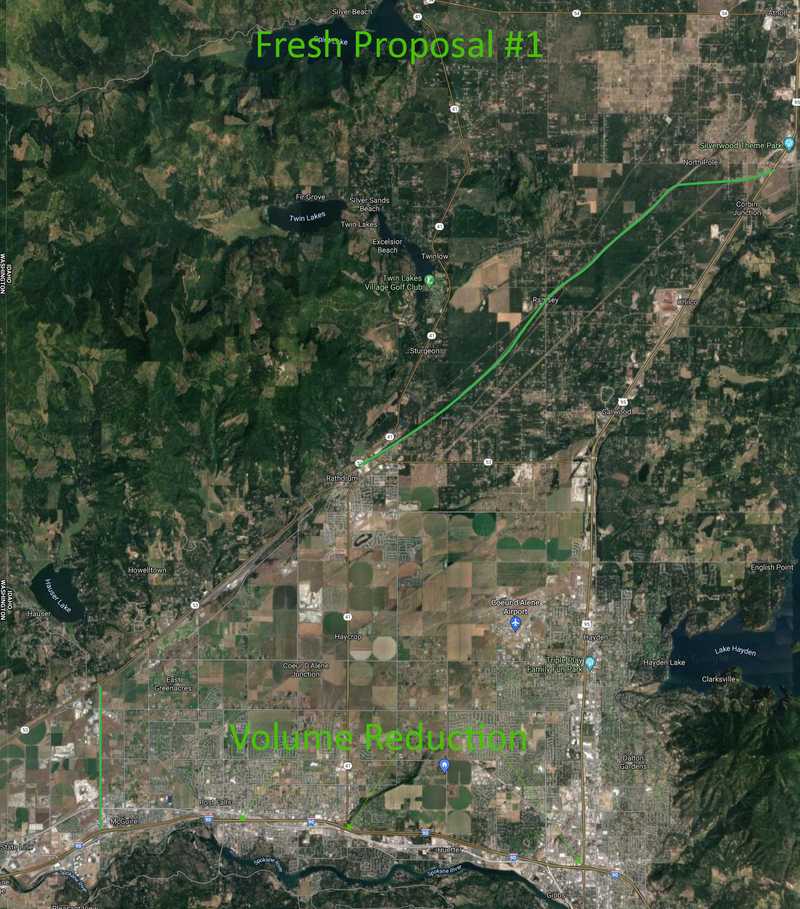 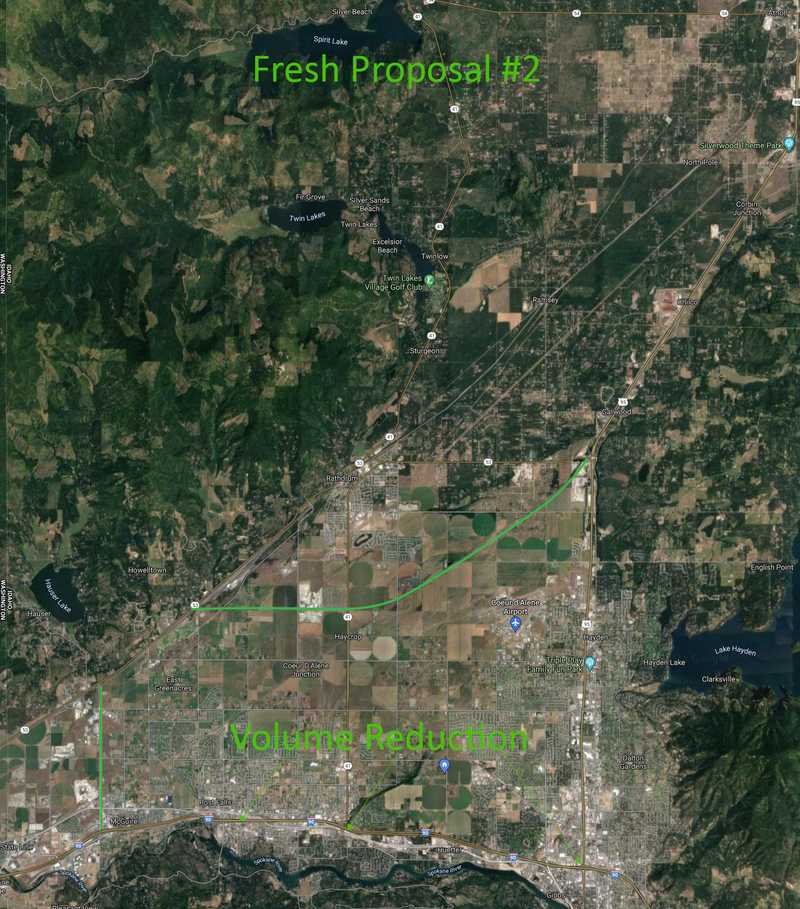 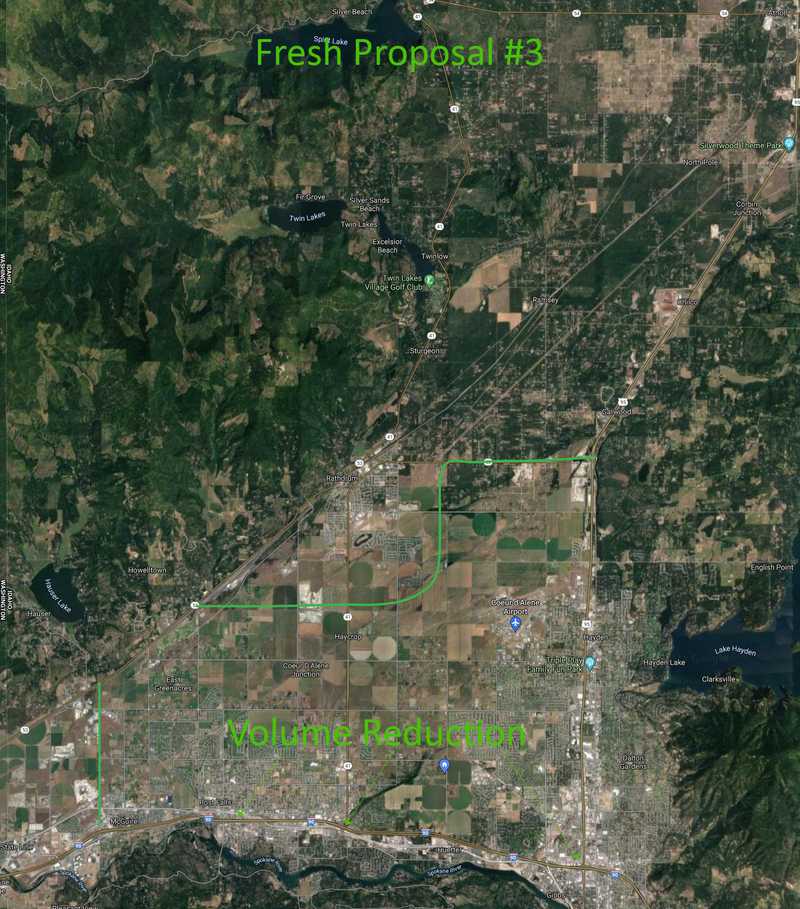