It has come to the attention of members of the community that there is to be a meeting regarding the Huetter Corridor and the Huetter Corridor Overlay Zone. Unfortunately, as has been the deliberate and inadequate process over the years, the people directly affected by the project have not been contacted by any official letter or materials from the government representatives responsible. The community's understanding is that properties within 300 feet of the project shall be notified. However, seeing that the right-of-way for this project is expected to be a minimum of 354 feet, dozens of houses should have been notified and have not been made aware.

This letter intends to request an immediate cease on any further actions, surveys, or more involving the Huetter Corridor project. The community must acquire and review requested documentation that is not available publicly on the KMPO website, namely how community input was reviewed and how changes to the Corridor project were determined. No further action must be taken until this has been completed. In the below details, you will find severe and egregious issues with the project that create deep concern in the community.

The money for the ecology study has been indirectly resourced from COVID-19 funding.

The US Treasury did not agree to have the money used in this fashion at the federal level. At the Idaho state level, there is no agreement that can be found on the website either, as the funds are to be used to keep the community moving forward through difficult times. The funds are not intended to be used to for unneeded or future projects. Please find the link to the US Treasury website below and how it is expected to be distributed.

The Coronavirus State and Local Fiscal Recovery Funds provide eligible state, local, territorial, and Tribal governments with a substantial infusion of resources to meet pandemic response needs and rebuild a stronger, and more equitable economy as the country recovers. Recipients may use these funds to:

However, in the KMPO Minutes for May 13th, 2021, Damon Allen is on record stating:

As registered taxpayers, many community members are in outrage that COVID-19 funds would be used to fund road projects and future road work surveys.

Historical tales have been told that either Greensferry or Huetter was the debated road to place a highway for north and south traffic to divert from I-95 to I-90. The Kootenai Metropolitan Planning Organization (KMPO), a federally sponsored group, drove this project under the guise that this additional highway would be needed to complement Highway 53, SR-41, and I-95. The documentation dating back to before the 2007 vote stated that, due to growth in the area, there would be no other way to support all the north and south traffic on I-95.

Now, nearly 14 years after a 6-3 vote where Rick Currie, a Kootenai County commissioner, said, "It boils down to whose ox is going to get gored" voted 'Yay', it is obvious that the corridor is not needed. In the meeting minutes from May 13th, 2021, Mr. Miles from the KMPO states the following:

What is evident from the history and how the roads have progressed in Kootenai is that the Huetter Corridor is absolutely unwelcome and pointless. It is the highway to nowhere. What is needed is a drastic remodel of how to approach traffic management in Kootenai County. Many states on the east coast, which already have the traffic issues described only as a hypothetical possibility here, have taken opposite actions than the designs currently being presented. Specifically, removing center turn lanes and intersection signals, where possible, replacing them with small, well-designed on and off-ramps to improve traffic throughput and reduced accidents.

In the April 2009 FINAL RIGHT OF WAY NEEDS REPORT HUETTER CORRIDOR STUDY, the following was referenced:

"Commissioners may lay out new highways within the county as they determine to be necessary."

Additional verbiage not quoted from the same section is the following:

"The commissioners shall endeavor to agree with each owner for the purchase of a right-of-way over his land included within the description. If they are able to agree with the owner [bold added], the commissioners may purchase the land out of the county highway fund under their control, and the land shall then be conveyed to the county for the use and purpose of highways."

The word endeavor as defined by Merriam-Webster dictionary:

1 : to attempt (something, such as the fulfillment of an obligation) by exertion of effort endeavors to finish the race

2 archaic : to strive to achieve or reach

The community and landowners have been saying ‘nay' to this project for years, along with a mayor and other government officials. The community does not see how the bureaucrats behind this project endeavored to come to an agreement.

It is concerning how much money has been devoted to Huetter Corridor project for all these years. The KMPO has been working on this initiative trying to address today's and tomorrow's traffic problems with 15 to 20+-year-old plans. This is one more reason that a land use overlay should not be issued until Idaho Transportation Department completes its study.

The existing three highways within 10-miles of each other, along with 10 other north and south roads, make an additional route unnecessary. Improvements to already acquired right-of-way land can achieve a better and more cost-effective outcome.

(1) The (name of entity allowed to use eminent domain proceedings pursuant to chapter 7, title 7, Idaho Code) has the power under the constitution and the laws of the state of Idaho and the United States to take private property for public use. This power is generally referred to as the power of "eminent domain" or condemnation. The power can only be exercised when:

(a) The property is needed for a public use authorized by Idaho law;

(b) The taking of the property is necessary to such use;

(c) The taking must be located in the manner which will be most compatible with the greatest public good and the least private injury.

The project does not meet two out of the three definitions. The property is not needed to satisfy better traffic flow in Kootenai County, and it is not compatible with the greatest public good by taking up more than 430 acres of prairie land. Applying over $300 million dollars as estimated in 2009 and adjusted for inflation in 2021, the half a billion dollars or more would be best used on much-needed roadway overhauls.

The Road For Canada

The facts are overwhelming that the Huetter Corridor is not for Kootenai County or its community. The KMPO, driven primarily by Glenn Miles, is building this road to nowhere for Canada. On the Coalition for America's Gateways & Trade Corridors (CAGTC) website, Mr. Miles is described as "…currently leading an effort with transportation agencies, economic development organizations and business interests in Idaho and Alberta, Canada in establishing greater ties associated with freight and commerce between Edmonton, AB and Coeur d' Alene, ID areas." Mr. Miles said in to the CDA Press that the KMPO does not work with Canada. 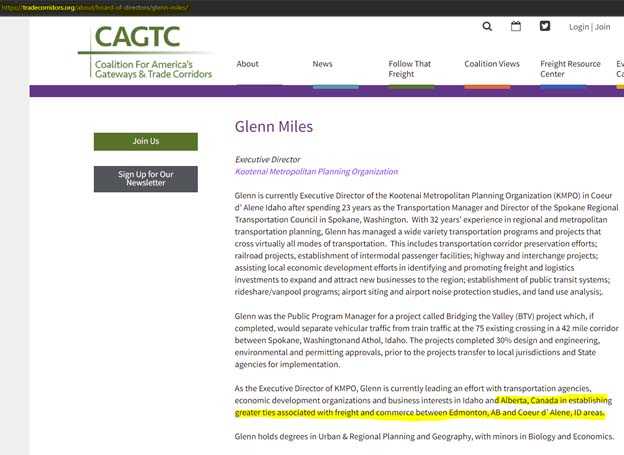 The federal government will gain substantial revenue by adding more transportation traffic from Canada through this area. But this revenue will not go to the local community. If the CAGTC wants to improve the roadways for transportation, they should be funding all road work between Coeur d'Alene and Canada. The road work must also take into account the private property of the citizens of Idaho, which it does not at this time.

Referenced in the April 2009 FINAL RIGHT OF WAY NEEDS REPORT HUETTER CORRIDOR STUDY, but not defined as to when the action would occur, is the Protective Buying and Hardship Right of Way Acquisition.

Before an overlay can be done for the Huetter Corridor, property owners who are currently affected must have their land acquired immediately if the County is serious about the project. The property value and ability to sell has dropped to impossible overnight in a bullish market. Real estate agents are reaching to Mr. Miles at the KMPO for details and he is telling folks that the highway will start being built within the next three (3) to seven (7) years.

Against the Voting Population

The United States is a republic and representative democracy.

When officials are elected, they are in place to serve their constituents. However, even if they have done their job well, some work goes to the people to vote on and approve or decline as it affects their communities.

In 2020, the Huetter Corridor Project was voted against, and the people expected their elected officials to listen and end the Huetter Corridor pipe dream; that is not what is happened. The vote came years after the 2007 smaller vote of bureaucrats that decided property values along Huetter road should be purposely depressed for an undetermined amount of time and keep people in worry of their land and freedom to find peace and happiness in the United States of America.

In a 6-3 vote, it must be noted that Clay Larkin, the mayor of Post Falls then and Vice-Chairman of the KMPO, voted against the project going further to make a statement that showed forward-thinking as it could impact "a couple or 300 lots." Most accurately, even in 2007, representing the people of the area then and now. Today, with a planned 4,500 houses in the same area and the dozens of homes in the development on the east corner of Prairie Avenue and Huetter, thousands of people will be negatively affected by this project. Moreover, the addition of a frontage road with required overpasses will not serve the community's real needs.

As quoted above in this letter, Rick Currie best represents the lack of vision for both the ability of people to architect better solutions and for people to work together for a better community. That mindset has carried forward since 2007 with all the bureaucrats that have continued to pursue this debacle of engineering planning.

Belittling of the Community

The bureaucrats who have been driving the Huetter Corridor Project have incorrectly labeled the community people against the project as closed-minded to growth and change in the area. Nothing could be further from the truth. The close-minded viewpoints have been on the bureaucrats' side. The people of the community have asked our local and state governments to address the current issues using the land that has already been consumed and show a legitimate growth plan for the area. These people, and the people currently working to be heard, have been met with nothing but opposition. The behavior shown to the community is disturbing, to put it mildly. Members of the KMPO, Kootenai County Planning, and others have refused to listen to alternative growth plans.

David, you are on record as saying:

"I am of the mindset that planning from the top down doesn't work," Callahan said. "We need the community to be engaged and to tell us what we should be doing to address growth."

Any further progress on the Huetter Corridor contradicts the above statement if all points and issues aren't openly heard and addressed as a community, not a committee behind closed doors. The primary point is the end of this project and the replacement with one that serves the community as needed.

Community Against the Huetter Corridor Project