What is the latest design of the Huetter Corridor?

The bureaucrats and others in charge of the Huetter Corridor project are mislabeling the size of the highway. The Huetter Corridor project has been called a 4-lane highway, a 6-lane divided highway, and a 4-lane highway with a 3-lane frontage road which will be the new Huetter Road. None of these correctly represent that monstrosity and disaster the the Kootenai Metropolitan Planning Organization (KMPO) has designed.

The cross-section design as of May 6th, 2021 can be seen here. Removing the distance for potential grass area, a typical 10 foot median and shoulder, and even the jug handle exits, the design is consistent with a 12-lane highway. See it online, presented by Kootenai County Planning GIS, here KC Earth - Huetter Corridor. 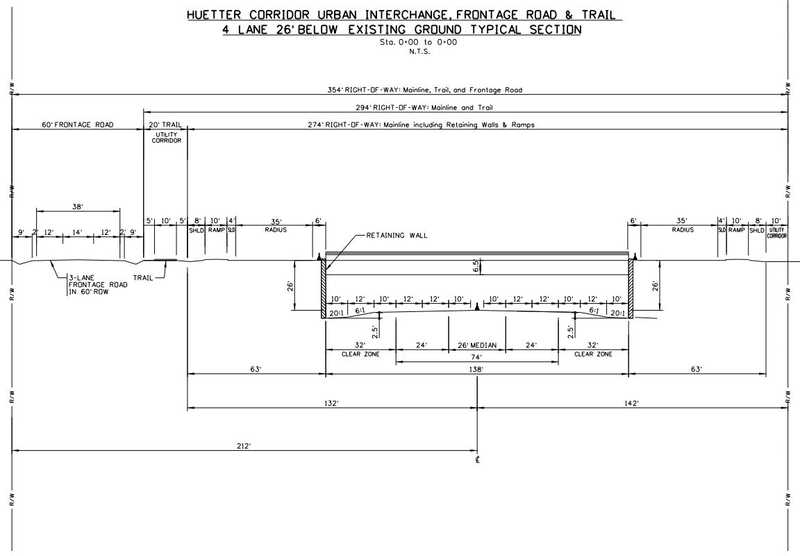 Will the Huetter Corridor Improve Traffic Conditions in Kootenai County?

The KMPO has released data results from a 2040 estimated traffic volume model. The difference in car volume impacted on I-95 is less than 15%. Further, the total average impact to car volume on the studied roads would be 8% or less% by 2040. The reason presented for the Huetter Corridor project starting in 2003 was to support growth in Kootenai County. All information presented has proven otherwise. The Huetter Corridor is not the path forward.

United States wide research has also confirmed that Bypass designs are not the way forward. The State Smart Transportation Initiative published the Innovated DOT Handbook in 2015 which addresses many of the issues we experience here in Kootenai County today. It also provides informed guidance on what has worked best.

Many states opt to widen their roadways or add capacity to the same roads they already have when roads suffer from congestion and inadequate capacity. They also sometimes pursue bypass projects, especially when the congested roadway they seek to address serves as a main street or other primary commercial street for a town or city. Instead, states can increase capacity on an overall corridor route by continuing to maintain the route on a main street and adding improvements on parallel and nearby streets that can increase service to the overall community and corridor area. This is often the least costly option. [bold added]